WHEN
HARD
WORK
IS NOT
ENOUGH

ALICE households refer to individuals and families with income above the Federal Poverty Level but below the basic cost-of-living threshold.

The FPL was developed in 1965 and is no longer a realistic measure of financial hardship for U.S. households. Its methodology has not been updated since 1974.

The bare minimum Household Survival Budget, though higher than FPL, does not allow for any savings, leaving a household vulnerable to unexpected expenses yet ineligible for assistance.

The success of our community is directly tied to the financial stability of ALICE households.

When ALICE suffers and is forced to make difficult choices, we are all impacted. ALICE households refer to individuals and families with income above the Federal Poverty Level but below the basic cost-of-living threshold.

ALICE is the retired veteran or the recent college graduate who can’t find affordable housing within a reasonable distance from work.

ALICE is your child’s favorite preschool teacher, your trusted mechanic, your elderly neighbor’s home health aide, the administrative assistant in your office.

ALICE could even be you.

ALICE households can be found in every town, city, and county in Arkansas. They include women and men who are single, married, young, and old. White households make up the largest demographic — 69% — mirroring Arkansas’s majority-white population. Across the state, the share of households earning below the ALICE threshold ranged from 26% in Benton County to 64% in Lee County.

In Arkansas, 41% of households can’t make ends meet. Seventeen percent live below the poverty level, and an additional 24% qualify as ALICE, an increase of 20% since 2007.

Nearly 30% of senior households in Arkansas qualify as ALICE.

More than 1 in 3 of families with children in Arkansas live below the family threshold.

Overall, the cost of household basics increased by 24% for a single adult and 32% for a family of 4 in Arkansas from 2007 to 2018. The increases were largely driven by rising costs of housing and childcare, far more than the increases in wages and inflation. 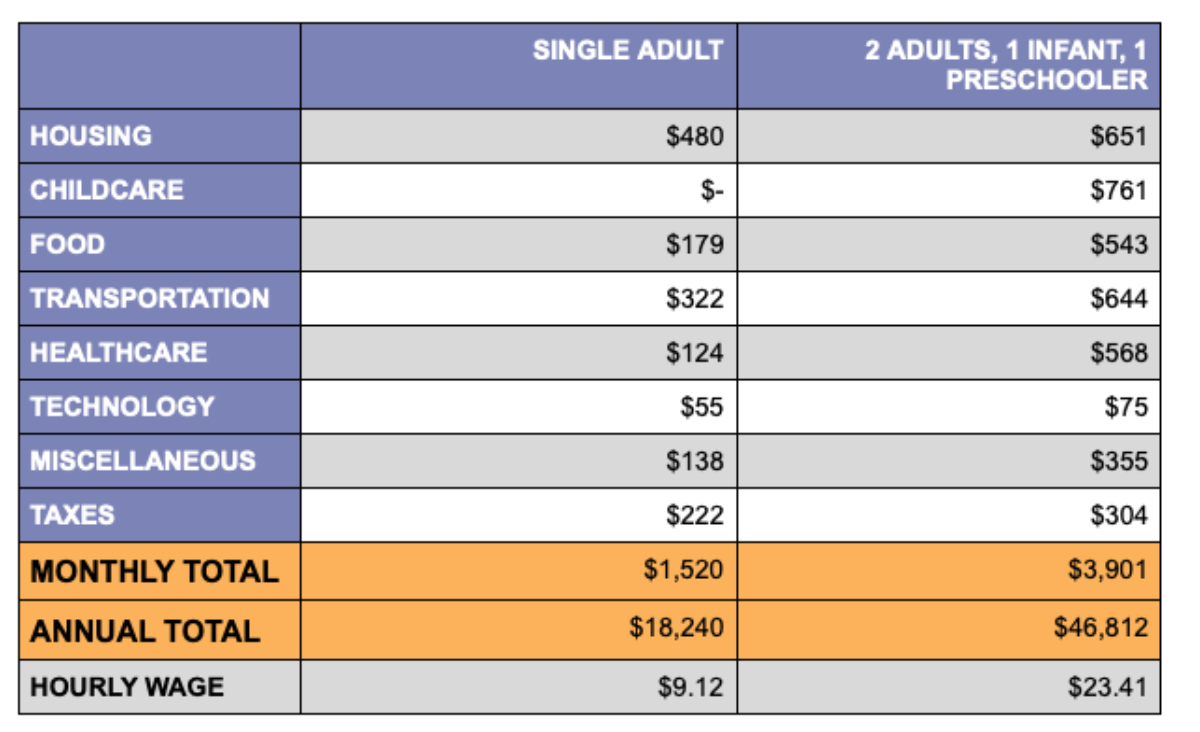 Of the more than 1.2 million jobs in Arkansas, more than half (51%) pay less than $15 per hour. A $15 per hour wage grosses $30,000 per year, which is more than $16,000 less than the Household Survival Budget for a family of four. IMAGINE the trade-offs these families have to make just to make ends meet.

IT'S TIME TO FOCUS ON ALICE

The ALICE research report quantifies and describes the number of households in the state that are struggling financially.

The ALICE research quantifies and describes the number of households that are struggling financially.

The report is a project of United For ALICE, a grassroots movement of some 600 United Ways in 21 states, corporations, and foundations, all using the same methodology to document financial need. Each state report is supported with an independent Research Advisory Committee of local data and subject-matter experts.

Despite promising economic reports, nearly a half million households in the state are not earning enough to cover basic survival costs.

ALICE lives in every county in Arkansas, and when these households cannot afford necessities, they are forced to make difficult trade-offs that have consequences for their households and their communities.

When 2 out of 5 households in the state can’t make ends meet, the system is broken.

Because of outdated poverty measurements, most of these households are invisible.

While the Federal Poverty Level (FPL) qualifies only 17% of Arkansas households as facing financial hardship, an additional 24% qualify as ALICE, an increase of 20% since 2007, meaning many struggling households do not have the support and visibility necessary to ensure their economic future.

These are Arkansans that contribute to our economy by earning, spending, and paying taxes yet are often told to “work harder” in order to get ahead. ALICE makes these individuals visible and documents the financial barriers they face.

WHY ARE THERE SO MANY ALICE FAMILIES IN ARKANSAS?

The basic cost of living continues to outpace wages.

The Household Survival Budget identifies the minimum cost for each of the seven basic household items needed to live and work in today’s economy: housing, childcare, food, transportation, technology, taxes, and healthcare

The cost of basic household necessities in Arkansas increased by 32% from 2007 to 2017, far more than the increases in overall inflation and wages. Child care represents an Arkansas family’s greatest expense, at a state average of $761 per month for two children.

Hourly-wage workers are paid only for hours worked, which shifts based on demand. They usually don’t have a contract, and if they work fewer than 30 hours per week, they are not required to receive health insurance, paid time off, retirement, or other benefits.

Fewer families have savings and assets.

More than any other feature, ALICE households are defined by their jobs and their saving accounts.

49% of Arkansans do not have enough savings for a rainy day, and less than 16% had investments that produced income, such as stocks or real estate.

ALICE households live in a trap of low-wage work, rising household costs, and limited opportunities to save. We can remove this trap by making sure that all working Arkansans earn a living wage and have opportunities to plan and save for a better future.

ALICE is no longer invisible and should be at the center of all Arkansas policy decisions.